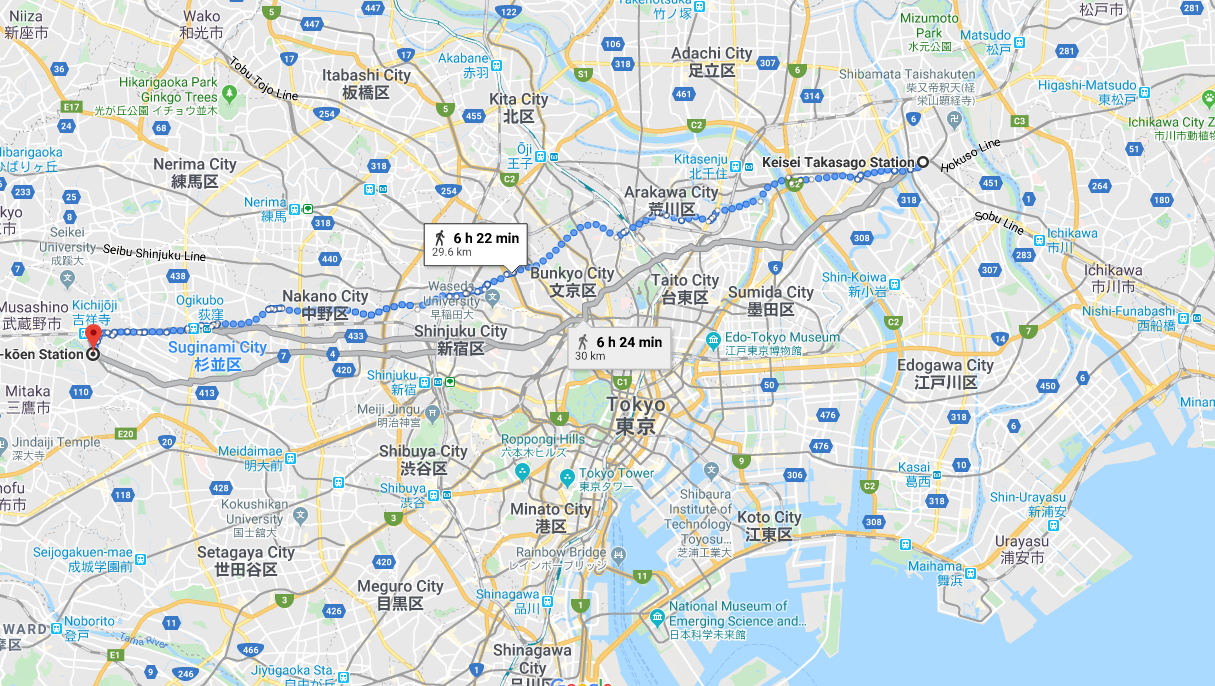 Today was what we can call an Adventure. Crossing Tokyo city from East to West on a Bike is a Journey. There is days where you just go out of the comfort zone to experience something unusual , something crazy. I believe having days like that , once in a while is healthy as it gives space for others unexpected things.

My dear friend kindly lend me the bike of her grandfather for my stay in Tokyo. But the bike was not close to my house. It was actually very far from it but it didn’t care , I thought this could be a fun adventure. From Chiba to Kichijoji there is about 30 km distance , but you have to cross Tokyo city , and I didn’t had any GPS…

The bike journey. By bike , google map was anticipating 3h20 but I knew this will never happen as I didn’t have access to a GPS.

But first a nice meal in a Japanese home

After a nice time I had to anticipate the journey that was awaiting me. The sun is actually setting down around 4h30 pm currently and it was already 3 pm ! I had to go. But I was pumped up and so happy. Sharing simple moments with friends is so precious. It gives this magical energy that it’s unexplainable with words. This “whatever” feeling. Whatever comes , I am just fine right now. I had to go now though.

The starting point of the journey. Countryside-ish landscape in the concrete Jungle that is Tokyo. One river , one bridge. I think there is 2 more rivers to go through.

Bicycle time ! So much fun to explore a place with the good old bike. From the distance can you spot Tokyo Skytree ? It’s the highest point of the city actually.

On and on ! Tokyo feels pretty safe so far. People are paying attention around so I did feel safe. 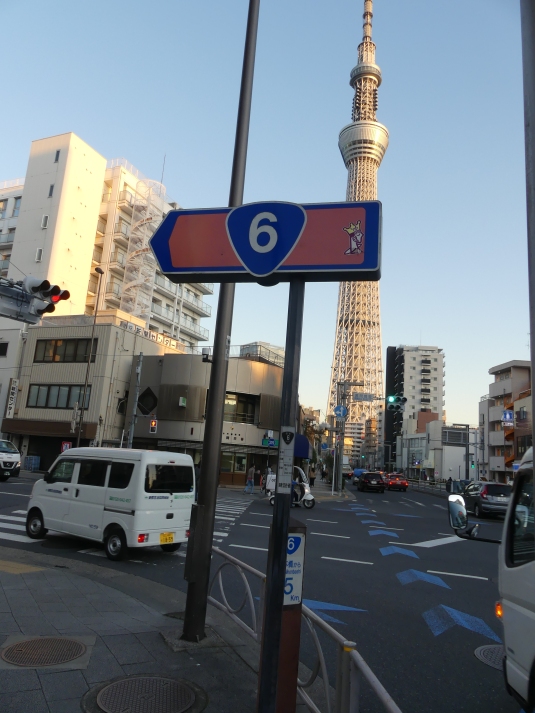 Tokyo Skytree from close now. It was nice reaching that first point but I knew I had so much more to go. Actually Skytree can be seen from very far away from my guesthouse rooftop. But I mean , so tiny from there ..

One more river. It was the Sumida river close to Asakusa. 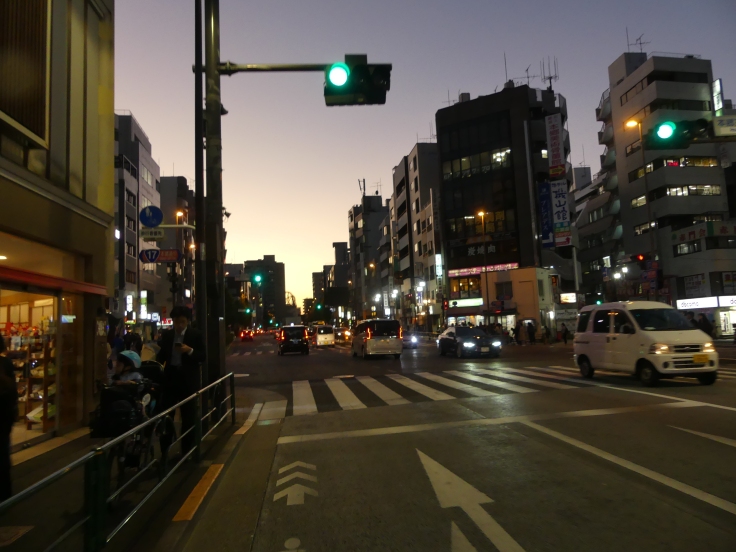 And the light fades away.. Okay I was not even halfway , but let’s continue this trip. I actually didn’t got lost which is quite surprising. The directions were fairly obvious.

Having a break here. Orange and “green tea” chocolate.

Toilet view. Nice to find these toilets everywhere , this make me very happy as you can see. It was cold today. Winter is coming and you can feel that in Tokyo , maybe around 13° during the day , at night less..

Okay from that next part I got lost a few times but asking people around will always give you the answers you need.

During this journey I crossed many neighboroords of the city which is quite interesting as you can “dive” into different bubbles. At that point I reached Kagurazaka , the “French district” of Tokyo. This area is filled with French eateries and there is also the “French Lycée” (high school) located just there. 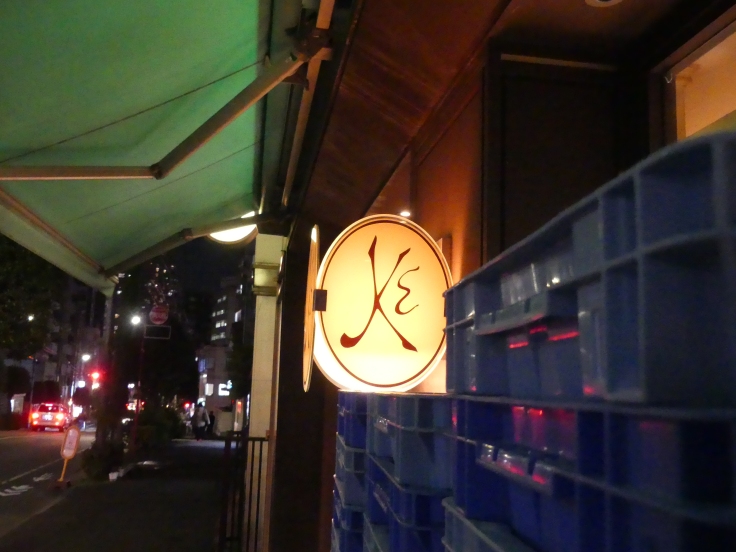 “Croissant aux amandes”. I just couldn’t resist and some calories were warmly welcomed 🙂 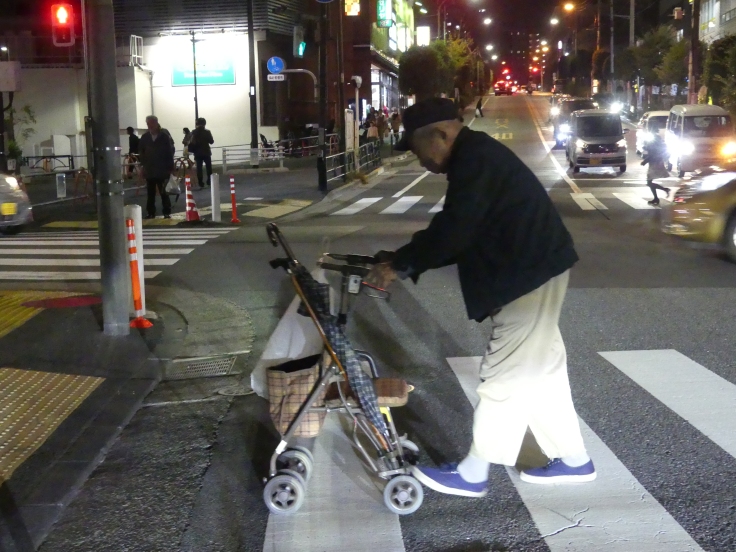 Shin Okubo. A vibrant neighborhood with the highest population of Coreans.

Now getting closer. Passing by to a place I’ve been to last year , Koenji. Along the Chuo line railways , many bars and sweet memories.. 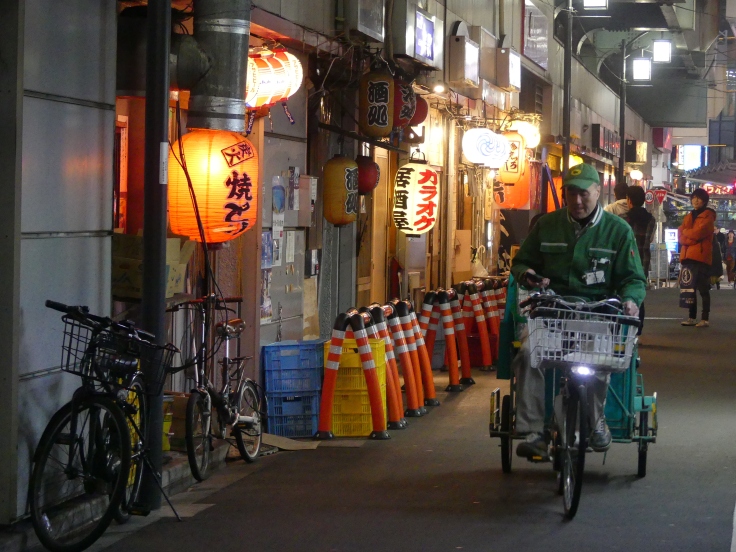 Along the Chuo line.

Something pretty cool I noticed tonight was the bikeway underneath some train railway. In that case the Chuo line were you could simply cruise. Simple and easy.

Shops and restaurant under the trains .. In Tokyo every spaces are optimized. Quite fascinating.

Man It was an adventure. Going throught the many different areas of Tokyo was an experience that I can just recommend (maybe best in warmer season). Biking remains my top favorite mean of transportation. You actually get to see a lot and have the freedom to stop where you want. No pictures can describe an experience but this one was surely fun and felt safe !
I finished the last 10 min with a Japanese guy that made a detour for me. Very nice man.

5 hours later , I am in Kichijoji , youpee !!! This was much longer that Google map planed but hey it was good fun.
A French saying : “Après l’effort , le reconfort ” , meaning that it is time to celebrate after having made this effort.

In front of OIOI store , Cleopatre Kebab shop. Time for some Falafels !!

Great meal here and sweet Egyptian owner. It was 650 yen so around 4.5 euro. Homemade Falafels as well. They also make Hummus here.

Cinnamon and Ginger icecream from Woodberrys. The shop was literally 20 meters aways. It was yummy and not too sweet which is nice.

I couldn’t stop here already. I was in such a high mood. My friend from the the guesthouse recommended me a place to wind down. Not for food this time.

Oasis of human warmth in front of Inokashira station and park. What a bliss to open the door of such a homy place. Welcome to Japanese Izakaya ! Here everyone sits close to each other and unwind from daily life. A place that is essential in Japanese society as it allows people to drop off the weight of daily society. It is a point to gather and have fun. A place where masks can fall.

Tokyo by Bike was a beautiful experience. Tonight I feel tired but also happy and full of power. I might be a bit sick tomorrow morning because it was pretty cold but damned … Out of the confort zone once in a while is gold !

Life is meant to be enjoyed. And there is so much potential here. Sometimes we just get stucked in our own bubble. We breathe our own air for too long and it is not healthy. Getting out and setting crazy objectives is a great tool to break down the old patterns. To go beyond this so-called “confort zone” that may limit us on so many aspects. Go out and explore friends. Accept to feel uncomfortable because it is part of the process. And the following touches of Magic..

Let’s cheers on that my friends.